Hi there, I hope you are all having a nice holiday season.
As for me, I am keeping quite busy despite the loneliness and am desperately trying to do my job, some volunteer help for the Tohoku area, turning the website for our PTA upside-down, transforming a two storeys (stories?) open room type house in a 3+LDK, and helping out my lil brother on his science assignment. And there's today's story.

So introduce my brother, who has been playing with water rockets since he was in high school. Now for his first year at university he managed to get himself a science assignment dealing with those

very things. I won't explain the principle at hand here because I already have lots of things to say, so look up wikipedia (I suggest reading the discussion page there too, it is abysmal in epic proportions) or check out this NASA picture.

Now you can imagine that you can do lots of fun stuff with your own rocket, especially when you learn that the record height achieved is around 600 meters... Well, a 2L soda bottle won't go that high, but it is still a very interesting way to conduct extreme experiments around embedded/autonomous systems.

When I was around the parents' home back in France, he tells me about his latest experiments
and how they thought they wanted to get telemetry readings for the system. That sounded cool, and I was thinking about my co-worker here who does all those neat things with arduinos, xbees, sensors and so on... 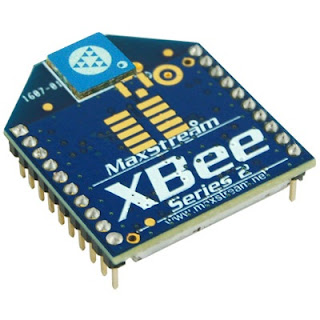 Actually, my brother and his friends' main skills are neither geekygadgetry nor computer science, so the final picture is not as complex as I imagined, but still beyond their reach. Based on a survey around his friends and professors, he gathered that Xbees are cool and can work in an autonomous way without any microcontroller, which is good when you don't have a clue. They are small chips (see pic on the right) that do 802.15.4, present a serial emulation to the user, feature 5 analog inputs and an associated ADC, and have a decent (depending on your own definition of decent) sampling frequency.

Well, to be honest he actually told me about this all on the phone before I came back, so that I could do a small shopping trip around akiba and bring an accelerometer. There it is : KXM52-1050, straight from Akizukidenki, behind the now defunct Yamagiwa/Livina (just saw they were doing some construction work there, something happening soon I guess). So this little chip eats 3.3V which is all great because most of the boards that can host the Xbee provide a 3.3v regulator to feed the sensors.

Now here's his plan : one Xbee on the rocket, with some form of power supply, hosted on a regulated board, where to hook the accelerometer sensor as well. On the receiving side, another Xbee (using just one doesn't make sense, does it ?) on a USB board plugged directly into a computer, and voila. It sounded so EASY.

Now that I look back on the whole process, it was. But for some reasons, the Xbee manufacturers went through great pain to write a very detailed yet completely useless documentation. All the information needed is inside, but after reading the whole 68 pages, I felt like I did not know what to do. Also there has been several versions of the chip, things changed, and there is no clear history of what went and what didn't. One important thing I learned at my expense is that the ADC used to do the conversion on the fixed 0~1.2V range only. But, in the latest document there is no mention about the voltage range. There is a two-line section about ADC that states that "Xbee supports ADC and here is how to enable it". Period. After lots of digging I found out that the "Pin signals" table stated that Pin14 is for "Voltage reference for A/D input". If the 68 pages were a haystack, this line would be the needle.

And then, the plan worked ! That is, until I saw the "software" that some friend gave to him in order to do the Xbee monitoring. If you can call a VB 20-liner a software, that is. Which is way I made another one for him that does .csv export and much more. More on it in another article but meanwhile, enjoy the output. Guess which line's the Z ? 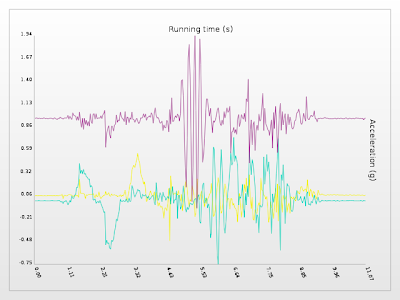 PS: I know I am getting behind schedule with the follow-up to the pachube article. It is still in the pipeline...

I acquainted like I did not apperceive what to do. Also there has been several versions of the chip, things changed, and there is no bright history of what went and what didn't.

You really delivered reliable information. It will be interesting and useful for those who are searching. It's correct place to find info, thank you regarding discussing information. seo services in hyderabad