So this is a rant about all the trendy new interaction devices. In fact, not so much against the devices themselves, but the way people keep trying to use them to emulate old things.

Our knowledge, our science, our tools have been built in an incremental way. Of course, who would invent a spanner when nuts and bolts don't exist ? And even though sometimes, someone has a great idea that is very far-fetched, it also often meets with doubts and perplexity. This is how we just avoided getting computers 100 years early, which might have bumped human technology on a very different path.

And so this is how after getting computers and monitors, people feeling the urge to interact with those beasts soon made out the keyboard, and then the mouse. For a very long time keyboard and mouse have reigned supreme over the world of user interfaces. 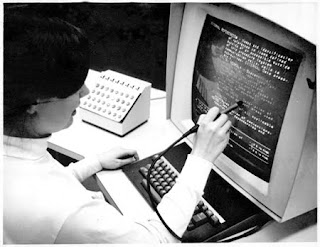 Of course there had been attempts at alternative ways, but these interfaces never took off and were doomed to stay a niche market. Probably a few schoolboys and girls from the 80s in France remember the Thomson light pen ? And there have been graphical tablets for decades now, and people using 3DVR stations have those gloves, and videogames have their own things filled with buttons.

But we all know the latest trend that seems to take off for real, is touch screens. This is not the dawn of touch interfaces, it has been pioneered for long by the graphics industry. Despite a few attempts at PDAs and smartphones (P900 anyone ?) that were expensive toys, the widespread use of touch devices has more likely begun with the nintendoDS and then the iPhone.

So what's wrong with touch devices ? I would say feedback. When you learnt to use a keyboard for so long, feedback is what makes you know you mistyped even before seeing it. This does not happen with touchscreen emulated keyboards. Now worse, the software thinks it is smart enough to guess what you intended to type, even in some situations where you did *NOT* make a mistake.

This is all because we want to use touchscreens the way we used keyboards. But touchscreens will never be keyboards, they are screens ! Kids like to look at pictures and slide them to see the next one. This is intuitive and cool. Probably the kids born around now will never have to use a real keyboard and won't miss it. But for me, as much as the mouse supplements the keyboard but can't substitute to it, so much can be said about the touchscreen. How many people use mouse emulation with the numpad ? 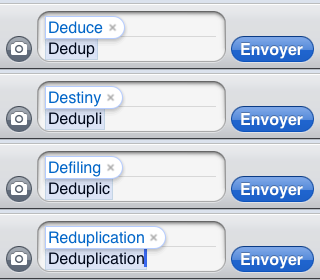 This all-touch trend, I call it "fuzzy interface". And by the way, I find it much more straining to type on the touchscreen because you have to check continuously that no error has been made, either by you OR the software. Here is an anecdote to close this case, redacted from a Google Summer of Code mailing list for mentors :